Current reports indicate that 60 percent of nursing home residents1 and 42 percent of assisted living facility residents have Alzheimer’s or another form of dementia.2 Nearly one in every five Medicare dollars is spent on people with Alzheimer’s and other dementias, and these costs are expected to increase more than 400 percent by 2050.1 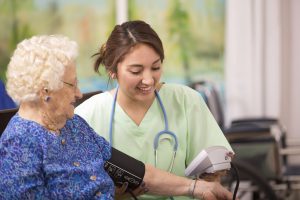 Behavior is a form of communication

The term “behavior” in Alzheimer’s or dementia patients is often associated with negativity. The behavior of patients with these conditions is frequently viewed as challenging, and clinicians often feel the need to manage them. But patients are often acting quite normal for the situation they are in. For example, when someone says they want to go home, some people in the early stages of Alzheimer’s or dementia are literally thinking about the home they just left. But people in the next stage may be thinking about the home where they grew up in Germany, “I want to go to that home.” They can’t necessarily verbalize what has happened.

CMS expanding use of the Focused Dementia Care Survey

In 2015, CMS expanded the use of the Focused Dementia Care Survey in select states, which looks at compliance with federal requirements related to dementia care practices in nursing homes. As a result, CMS revised the survey materials and tools based on surveyor feedback and data analysis. The following care tips for persons with Alzheimer’s and dementia go beyond compliance of the federal requirements with ideas that will also enhance the quality of life for these patients.

1. Be a detective – look at what you can change.

2. Being a model can make a huge difference.

5. Work on building more trust with your residents.

Products for Alzheimer’s and dementia care

The below suggested products and routines can help improve care and quality of life for residents with Alzheimer’s or dementia.

Be advised that information contained herein is intended to serve as a useful reference for informational purposes only and is not complete clinical information. This information is intended for use only by competent healthcare professionals exercising judgment in providing care. McKesson cannot be held responsible for the continued currency of or for any errors or omissions in the information.